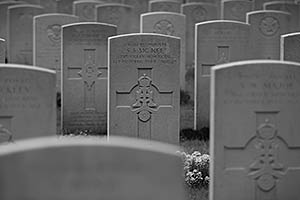 Every year on May 4th, the Dutch commemorate civilians and soldiers who have died in the Kingdom of the Netherlands or elsewhere in the world since the outbreak of the Second World War, both in war situations and in peacekeeping missions. This month, I visited the Arnhem Oosterbeek war cemetery. I just focussed my camera on one of the many tombstones and searched on the internet for more information about this young person who died for our freedom.